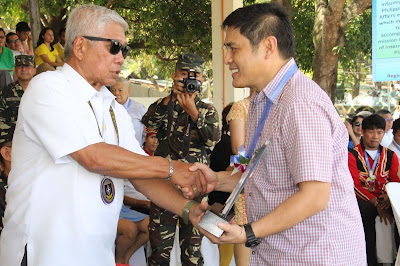 Philippine Information Agency Caraga regional director Abner Caga receives the plaque of recognition for his invaluable support to the Philippine Army in its public affairs efforts in Caraga region which immensely contributed to the successful accomplishment of the Command’s mission in the implementation of internal peace and security plan (Bayanihan) during the 46th Founding Anniversary Celebration held at Camp Edilberto Evangelista, Cagayan de Oro City on February 1, 2016. (PIA Caraga) 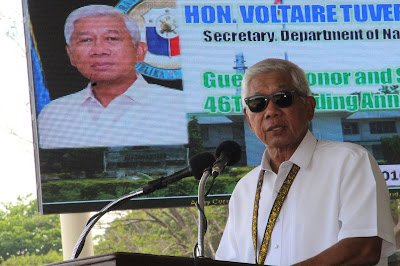 Defense Secretary Voltaire Gazmin during the 46th Founding Anniversary Celebration of the 4ID (Diamond), Phil. Army held at Camp Edilberto Evangelista, Cagayan de Oro City on February 1, 2016, as guest of honor, recalls with pride his service to the AFP. "I congratulate 4ID (Diamond), PA for it has continuously mirror the accomplishment of its mission. I've always considered 4ID, PA as my own. Your strong commitment and discipline be emulated by other units. You have continuously performed precarious job and I commend this command for this significant gain in safeguarding our communities for the progress of nation and people," underscores Gazmin. (PIA Caraga) 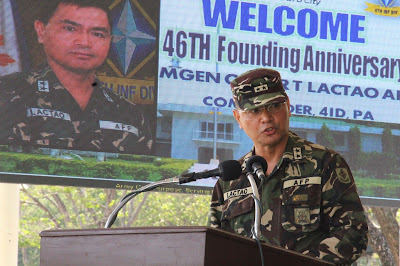 In his anniversary remarks during the 46th Founding Anniversary Celebration of 4ID (Diamond), PA held at Camp Evangelista, Cagayan de Oro City on February 1, 2016, MGen Oscar Lactao pointed out that the peace and security campaign of the division has achieved much of its purpose in preparing the region for accelerated development. (PIA Caraga)